What health benefits have been associated with CBD? The only FDA approved medication containing CBD in the United States is Epidiolex, which is mainly used for rare forms of epilepsy, such as Dravet’s syndrome. In the UK, the situation is essentially the same. The only types of medication that can be prescribed are again for rare types of epilepsy as well as for multiple sclerosis.

However, if the wealth of stories on the internet are to be believed from celebrities, sportsmen and women, health professionals as well as your average, everyday person, there is more to CBD than what it is prescribed for. It’s association with it helping a range of different health conditions haven’t just formed from thin air.

Blair Gibbs from the Centre for Medical Cannabis who stated,

“The irony is that CBD hasn’t been proven in enough clinical studies to be classed as a medicine, so none of these companies that sell CBD oil can legally claim to have any medical benefit for the people buy them. But, anecdotally it’s a different story. It wouldn’t have got the level of 1.3 million regular users if people weren’t buying it, spending £25 a month or more if they weren’t receiving some benefit themselves.”

The range of conditions which people have claimed CBD helps with is astoundingly large. It has been linked with types of auto-immune conditions such as Alzheimer’s disease, Crohn’s disease and Parkinson’s disease. It does this by controlling the auto-immune response, stopping the inflammation and pain symptoms that occur when the immune system falsely responds to invasion, attacking its own cells in the process.

CBD is also popularly used to help with skin conditions such as psoriasis and acne. These two conditions are also auto-immune conditions even though they are commonly considered skin conditions. Again, because CBD is an anti-inflammatory, it suppresses the inflammatory response from the immune system which helps to control the physical effects of these skin conditions.

In the UK, studies show that CBD purchased on the high street is mostly used to treat anxiety and depression, making up approximately 40% of purchases. People are using CBD as an alternative to pharmaceutical-based antidepressants. The CEO from chemical testing & analysis company, EoS Scientific stated,

Research in the United States has shown that medical marijuana is mostly prescribed for chronic pain relief. Ex-NFL stars are running campaigns within the US to get opioid medication replaced with CBD for the management of acute and chronic pain injuries.

In contact sports it appears players are currently advised to play through symptoms of pain by taking opioids, causing cases of severe opioid addiction. CBD has shown to have no addictive qualities and anecdotal comments from these sports stars indicate that their pain symptoms are reduced. 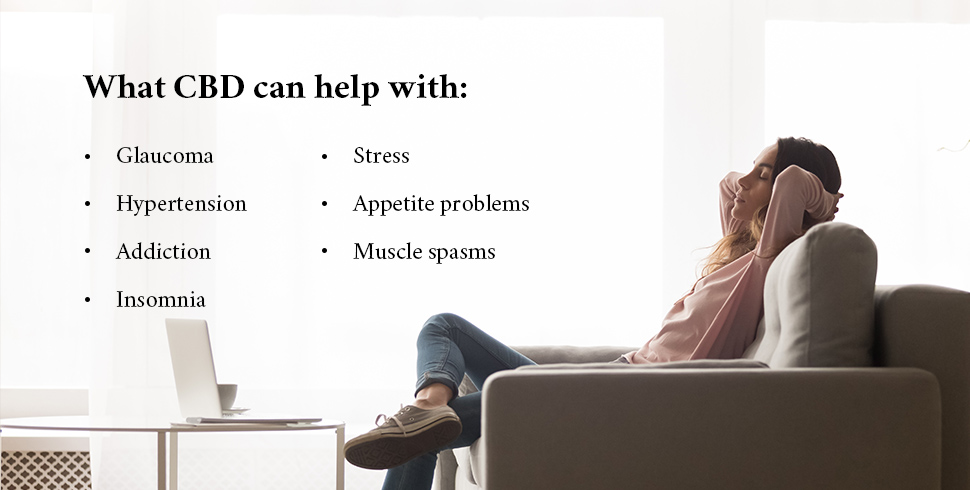